Recent Posts
Crazy Cases Update
04 Dec 2021
Can a class reduce the development and progression of canine cognitive dysfunction?
27 Nov 2021
Physiotherapy is a Profession, Not a Treatment Technique
19 Nov 2021

The study utilized five client-owned adult mixed-breed dogs were used in the study. All dogs were of nonchondrodystrophic breeds, were between 1 and 4 years of age, had a body weight between 20 and 30 kg, and had a body condition score of 5 (scale, 1 to 9). No dog had previously worn a vest of any type. Physical examination of the dogs revealed no abnormalities, and there were no signs of lameness.

Markers were placed at T1, T13, the xiphoid process, each iliac crest, each ischium, the dorsal aspect of each scapula, the spine of the scapula, and a triangular marker at the base of each scapula, as well as the 5th metatarsal bilaterally. 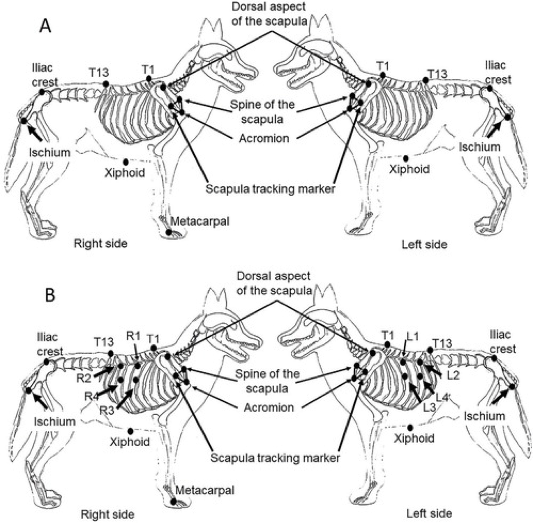 Once data collection was completed for a dog at the walking and trotting gaits, the dog was acclimated to the applicable service vest. Both vests used in the study (a custom vest and an adjustable vest) weighed 1 kg.

Trunk motion of dogs when walking and trotting was significantly reduced when dogs were wearing a vest, compared with trunk motion when not wearing a vest.  Although the present study was focused more on establishing a technique to assess truncal rotation of dogs during a gait, it was interesting, but not surprising, that the custom vest restricted the trunk rotation more than did the adjustable vest. The custom vest had fabric that covered the entire trunk, whereas straps were used to hold the adjustable vest in place.

So, what are we to think of this?  I think it’s interesting and points us towards asking more questions.  Is this the same for any harness?  Would there be long term implications to exclusively wearing a harness when out for walks?

The body is designed to move.  Restricting it could lead to adaptations over time.  In my opinion, I would think that dogs that wear harnesses frequently or exclusively when out to walk, run, or play, could have issues that might arise elsewhere.  For example, if the spine is ‘stiffer’ might the dog compensate with more / altered SIJ motion, altered hip / hind leg tracking, changes in front limb use, perhaps reduced rear end propulsion or transference of forces from rear to front, maybe an overreliance on front limbs in general.

All in all, this is simply one foundational piece of a puzzle… without any directive as to what the puzzle is supposed to actually look like!!!  However, at least in regards to the kinds of harnesses used in this study, there is a reduction in truncal motion, and that has to have some kind of implication.  We just don’t know what.  More harness studies are needed for sure, and hopefully we will start to be able to make some clinical use of the harness studies that will be coming out.  Until then, check your harness dogs for other issues!