The 14-year-old girl trapped in the body 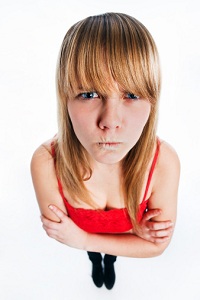 There once was a little nerve.  She lived in a usually safe space, surrounded by bone to protect her.  Normally nothing bad happened here.  One day however when her owner (a lovely fit large breed sporting dog) was getting into the car, she got pinched.  Normally, the little nerve was able to tolerate a little poking or stretching, but today was a bit more than normal.  Today, the pinch caused some inflammation.  It didn’t hurt right away but over the next little while it got a bit more sensitive.  It caused the body to hold up a leg, to tuck the pelvis, and sometimes with the wrong movement it caused another pinch… and a yelp.  As such the nerve was at a critical juncture…

Have you heard my 14-year-old girl story?  It’s what I use to describe nerve pain.  Nerve are like 14-year-old-girls.  Drama. Drama. Drama.  I once had a patient (a 14-year-old girl, surprise, surprise) who told me that ‘everything’ was painful when I was assessing her knee.  I had to get her to really focus on which of the things was the ‘worst of all of the pains’ in order to properly assess her, and get some accurate information.  Inflamed nerves are like 14-year-old girls.  They’re pissy and moody and it takes nothing to set them off.  They complain about things that aren’t really that bad, and you can’t just tell them to ‘snap out of it’… because they won’t!  So, to treat an inflamed nerve, you need to calm it down, give it a chance to settle, sneak up on it if you have to, try to outsmart it… (but don’t get caught).

Back to the dog.  So, the owner had brought in one of her dogs because she had been run into by another of the dogs and she was worried about the front leg.  I did find a bit of a shoulder sprain / joint irritation but minor.  I found rib dysfunctions (correctible).  But she was weird walking around the treatment room… pacing and being sucky.  I noted that she was lifting one rear leg off the ground just a wee bit whenever she would stand.

I checked the SIJ – just a minor dysfunction there.  No pain in her lumbar spine (with just basic palpation), mild tenderness in one iliopsoas muscle, and all else was normal.  At the time, I figured that she had just tweaked her iliopsoas.

Not long afterwards, the owner messaged me and sent a video of the dog getting out of the vehicle (when they were going for their walk just after leaving the clinic), and she was holding up that same leg.  That’s when I figured that a nerve root had been pinched (likely just when she got in or out of the vehicle in coming to see me) and that the dog was now experiencing the inflammatory sequelae secondary to the pinch.  I figured that was the only reason that I couldn’t find the offending area at the time of evaluation.  It was too new!

So, I prescribed Tail Pulls.  The owner had an anti-inflammatory medication at home and was also going to use CBD oil as well.  She noted some ‘squeaking’ when the dog moved that evening, but that she really liked the tail pulls.  I told the owner that she could use heat or cold, and to keep her quiet.

She was much better the next day.  So much so that she took her to an acreage to romp about.  (I had already said that she could only go out with the older slow moving boy.)  She sent me a video.  Indeed, the dog looked much better, but I did see one hitch of the leg and I told her ‘don’t push it right now’.  (It’s easy to alarm the 14-year-old girl.)  And in the end, a slow returning to activity with some relative rest (LEASH walks… not off leash romps) for a couple of days managed the problem.

There you go.  A real-life story.  A little allegory.  And a way to classify nerve problems (on the 14-year-old girl scale)!